Posted on November 14, 2010 by richardmorrisauthor

People Pay Tribute at The Wall -- The Vietnam Memorial

For the third year in a row, I spent Veterans Day on the National Mall in Washington, D.C. in the Memorial Day Writers’ Project tent (www.memorialdaywritersproject.com) near the Vietnam Memorial where a dozen of us honored our veterans with poetry, prose, and song. The day was glorious—sunny, with temperatures reaching into the low sixties. Soldiers and families who came to see the Wall streamed by on the sidewalk by Constitution Avenue and paused to look at photo albums and listen to the participants throughout the day. A bus load of 1st Cavalry Division veterans from Philadelphia spent time with us.

Some of the MDWP participants were:

Vietnam in 1966-67 (3rd Marine Amphibious Forces, Cu Chi, Da Nang, An Khe, and Phu Bai), read poems from her book, Who Knew? Reflections on Vietnam, including her poignant  poem,  “Where Can I Find Them on the Wall?” about her frustrated search for soldiers on the Wall who she only knew by nicknames. The last line reads: “I never got to say goodbye or welcome home—I miss that, most of all.” Holley is also co-writer /narrator of “A Touch Of Home: The Vietnam War’s Red Cross Girls,” the 2009 GI Film Festival First Prize for Short Documentary (DVD available from www.arrowheads.com).

Jonathan Myer, an ex-Air Force pilot and Forward Air Controller, flew the F-101B and ‘F “Voodoo” two engine two-seat supersonic interceptors for three tours and ten years, but flew the Cessna O-1E “Bird Dog” (aka L-19), cruising at 80 mph, for his Forward Air Controller (FAC) tour in Vietnam. Now that was really coming down to earth!  Jonathan played his 12-string guitar and entertained us with many of his songs, some about the dangers of flying into buffalo dung and NVA bullets, one about the tension between pilots and soldiers on the ground who want their air support right now despite how many bullets are flying, and one about the fear of running out of fuel and not making it back to base.

Tom McLean, an MP stationed in Qui Nhon sang many original songs, including “Conversation with Grandfather,” a conversation with ancestor veterans of previous wars, “Mission of a Different Kind,”  “Aging Veteran,” about a guy near the end of life telling his tale about his war and its affect on him, and “Flashes,” about the constant interruptions from flashbacks.

Alexandra Lajoux sang with him on some and then led the audience in singing,

“Where Have All The Flowers Gone.” Her album “My Country” is being distributed by the American Forces Network Iraq. She uses the funds she receives for packages she sends to our troops in Iraq.

Clyde Christofferson read excerpts from his book “Your Hero and Mine, Scott”—letters written by his then 19-year old brother. Scott was killed in an ambush near Chu Lai as he served with the 101st as combat reporter.

Bochar Ba joined us to read a tribute to World War II veterans from Senegal.

Dick Epstein, organizer of the Memorial Day Writers’ Project read his poem, “Polished Stone,”  and a Clyde Wray poem, “I want to write.”

James W Stewart (aka Tanker) from Oklahoma, sang several songs by Woody Guthrie, Hank Williams, and Johnny Cash: “Deep in the Heart of Taxes,” “Folsom Prison Blues,”  “Me and Bobby McGee” by Janis Joplin, and many others–on his 100-year-old guitar.

Gerald Ney from Philadelphia read “In Memory of Skip,” about 1st Lt. Skip Renshaw who was killed on Easter Sunday 1969. “On the Road to Ollie,” told of a jeep ride to LZ English on Hwy 1; “Christmas Eve at Shitfield Tower,” about a night as a perimeter duty officer on the edge of LZ English’s airfield, and “Dealing with Nam Anew,” by Isaac (Ike) Richard Jones. And others.

War stories. Everyone’s war was different, but the commonalities bring us together.

My appearances were spread throughout the day. I–former Lt. Richard Morris, A Co. 2nd Bn. 5th Cavalry 1st Cavalry Division, 1967-68, sang songs from my Skytroopers CD—songs I wrote in Vietnam (Click on “Skytroopers CD” above and listen to samples

Skytroopers - songs of war, peace and love from Vietnam

of the songs at www.cdbaby.com/richardmorris). “Bong Son Bridge” is an upbeat song with trucker beat about guarding a bridge, “Chanh Giao Cave,” about laying siege to seventy-four NVA soldiers in a rockpile on a hillside for thirteen days, and “The Ballad Of John Wesley,” about a heroic black soldier in C Co. 2nd Bn. 5th Cavalry 1st Cavalry Division 1967, who volunteered to be point man (first man in the patrol) for an entire year and killed eleven enemy soldiers. I wrote these songs when I was a hawk fighting to prevent the advance of Communism. (Now, the Chinese Communist-Capitalists seem to be making most of the products I buy. They’re our second biggest trading partner, and their central bank has bought so many U.S. Treasury securities that in 2009 we owed it about three quarters of a trillion dollars. Go figure, as they say.)

I also read passages from my Vietnam War satire, Cologne No. 10 For Men. One was about counting bodies of dead enemy soldiers after a harrowing night ambush. Body counts were how we kept score in the war and were used to calculate kill ratios. Ten to one was considered good.

Another reading was about indomitable soldiers in mangrove swamps in a cold monsoon rain discussing their last cigarette. (I had to cut this passage from Cologne because the book was too long and this passage was unrelated to the plot. But you can find it above by clicking on the “Cuts From Cologne No. 10 For Men” tab under the “Cologne No. 10 For Men” tab.) I sang “When’s The Sun Gonna Shine On Camp Evans?” also about the monsoon rain, and then “Diggin’ A Hole,” about digging foxholes and sleeping holes (and filling them in), an activity we performed daily all over Vietnam; this song received a finalist award in the Vocal Jazz & Blues category of the 23rd Annual Mid-Atlantic Song Contest in 2006.

In my “Spot of Green” reading, a soldier walking across a firebase comes upon a pile of plastic body bags, two deep, ten high and twenty or thirty long, “each stuffed with the refuse of battle and neatly tagged for shipment.” Fifty-eight thousand Americans died in Vietnam—ten times as many as have perished in Iraq and Afghanistan and five thousand more than in Korea, but only half as many as in World War I, one-seventh as many as in World War II, and one-tenth as many as in the Civil War, our most horrible war (source: http://en.wikipedia.org/wiki/United_States_military_casualties_of_war). “When will we ever learn?”

There are living veterans to remember too—those crippled with physical and mental wounds, and poisoned with chemicals like Agent Orange. “The Chaplain” is a song about a fictitious chaplain who leaves the field with battle fatigue. I dedicated it to the soldiers who come home with PTSD.

I decided it was time to lighten up, so I sang “I Got A Lonesome Me,” a silly song about all my body parts that were lonesome (I leave out one important part), “Mirage,” a love song I wrote to my wife of 43 years while sitting on a sand dune overlooking the South China Sea, and “Go To Sleep,” the lullaby I wrote for my yet-to-be-conceived children. “Go To Sleep” is also on my daughter’s CD, “Imagine That” (see www.rickandaudrey.com).

We sold many copies of Cologne No. 10 For Men and Skytroopers CDs at the event, and are very pleased that our sharing will get passed on in this way. It was a long day, and when we said our goodbyes, the shadows were long and the thermometer was plunging. We left, happy to have remembered our fellow veterans. 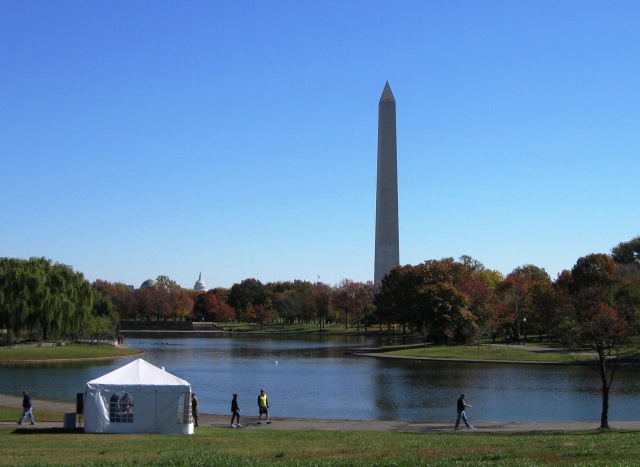 View From The Tent