Posted on February 9, 2011 by richardmorrisauthor 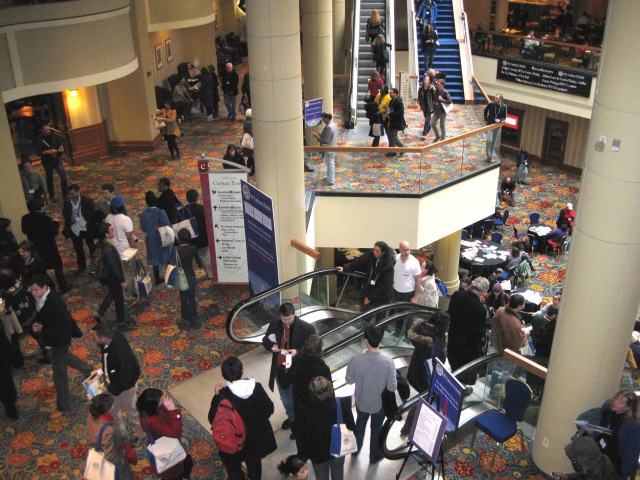 Picture two of Washington, DC’s grand old hotels—the Marriott Wardman Park and Omni Shoreham. It is crawling with writers from across the country, plus editors, teachers, students, and publishers—all gathering to listen to their favorite literary luminaries, to learn and teach, and to sell their wares. The event?—the Association of Writers & Writing Programs Annual Conference—the AWP.

Upstairs were 360 seminars on short stories, poetry, novels, essays, teaching, MFA programs and readings by authors. My special interests were historical fiction, such as my novel Well Considered, and young adult novels (my work in progress).

The author readings were memorable. My favorite was Joyce Carol Oates, writer of more than fifty novels, (http://en.wikipedia.org/wiki/Joyce_Carol_Oates),  winner of the National Book Award for her novel Them, and twice nominated for the Pulitzer Prize.  She read from her memoir Widow’s Story, due in bookstores in mid-February, about the death of her husband of forty-six years and her ensuing grief and recovery. How moving it was. More than a hundred in the audience lined up for her to sign their books.

Then there were the National Book Critics Circle Fiction Award Winners and Finalists. Edward P. Jones read from The Known World, which won the Pulitzer Prize. The passage was about a white slaveholder, Robbins, berating the black slaveholder Henry Townsend, Robbins’ former slave, for being too familiar with Henry’s slave, Moses.

Jayne Anne Phillips wrote the New York Times best seller, Machine Dreams, which was chosen by the New York Times Book Review as one of twelve “Best Books Of The Year.  Phillips told of the characters in her novel, Lark and Termite—Lark and her brother, Termite, a child unable to walk and talk but full of radiance;

Elizabeth Strout, described her novel Olive Kitteridge, a collection of 13 connected short stories about a woman and her family in coastal Maine, which was a New York Times Bestseller and winner of the 2009 Pulitzer Prize);

Colson Whitehead, who wrote John Henry Days (also Sag Harbor,  which was a finalist for the PEN/Faulkner award), described a haircut by his father—a fro that got shorter and shorter, and wilder and wilder, and always more embarrassing;

Poet Thomas Sayers Ellis (www.tsellis.com) read “My Meter Is Percussive,” which was delightfully so. Ellis received recent attention in the Washington Post (2-9-11) for “swiping a [lifesize] cutout of Langston Hughes” from DC Restaurant Busboys and Poets﻿﻿﻿﻿﻿﻿﻿﻿.  The restaurant was named after Hughes, who was discovered by poet Vachel Lindsay while Hughes worked as a busboy at our host hotel, the Wardman Park.

The session was moderated by AWP Jane Cibattari (www.janeciabattari.com),  president of the National Book Critics Circle, and author of the critically acclaimed short-story collection, Stealing the Fire.