Posted on September 15, 2014 by richardmorrisauthor 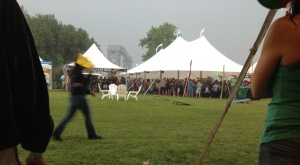 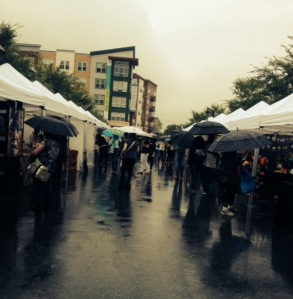 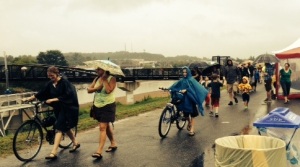 Rolling to the Battle of Bladensburg, MD

These past three festivals we’ve been to—Burning River Fest in Cleveland, the Undaunted Weekend in Bladensburg, MD, and most recently, the Hyattsville (MD) Arts Festival—trying to talk to people and sell books in the rain—remind me of a song. It’s one I wrote in Vietnam, back when I was fighting “godless Communism” in the war to end all jungle wars:  “When’s the Sun Gonna Shine on Camp Evans ?”—a sad commentary on rockets raining on American soldiers during the monsoon season in 1967. It’s on my  Skytroopers CD.

The amazing thing we’ve noticed during our recent personal monsoons is that enthusiastic festival-goers won’t be stopped by rain. One artist was overheard saying that she’d rather have people popping into her tent out of the rain to look at her jewelry than to have everyone go to the beach on a sunny day.

The Hyattsville Arts Festival has grown in reputation and expertise in recent years and had about twice as many applicants as space available. We were delighted to be included and to participate, in spite of the rain.

Many of the songs on my Skytroopers CD have a parallel in the story line of Cologne No. 10 For Men. Here’s a monsoon segment of the original novel that disappeared when I cut the book length in half (it did not relate closely enough to the plot).

They flew deep into the mountains under heavy clouds to a huge plateau with head-high elephant grass, soggy earth and mangrove swamps. The mission was to search for and destroy VC. If we can find any, thought Wilfred [the protagonist].

Misty rain for endless days. Fifty or sixty degrees. Everyone in ponchos. Slogging through knee-deep water under trees. Oozy black mud sucking canvas boots. Cold. Watching for snakes, slapping at mosquitoes. Leeches clinging and drinking. Making them fall off with overdoses of insect repellent or Zippo lighters. Wrinkled toes and fingers. Itchy places. Sores that won’t heal. The perfect place for immersion foot–your toes rot and fall off. What do you do? Take off your boots at night and let the air get to your feet. How can you fight? You don’t need boots to fight.

A group of ponchos and steel pots sitting around, bullshitting in the drizzle. An ambulatory version approaches. It speaks. “Hey, anyone got a cigarette? Mine got wet. Christ, I could sure use a cigarette.”

“I got one left. Here, you want it?” Reaching under the poncho.

Hungry eyes on the white cylinder. “Jeez. You sure it’s O.K.?”

The giving fingers break the cigarette into pieces. The barest hint of a smile.

“Shit, man. What’d you do that for? I mean somebody could’ve smoked that thing. That was really a shitty thing to do.”

The soggy group almost smiles, almost laughs. Everyone feels a little stronger and tougher, a little more in control.