Posted on September 26, 2016 by richardmorrisauthor

People asked us many questions on Saturday at the Baltimore Book Festival on the Inner Harbor in Baltimore where I was selling my novel Cologne No. 10 For Men:

2) “Does this book take place in Cologne, Germany?”

4) “Why does that soldier have his finger under his nose?”

5) “Why are you in the Maryland Public Television booth? Is MPT making a movie out of Cologne No. 10 For Men?!”

7) “Do you know where the Porta-Potties are?” 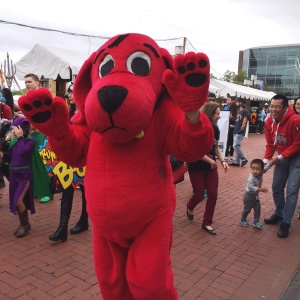 Watch out for the dogs in Baltimore

We received many questions in our booth from puzzled people. I’ll try to take them one at a time.

1) No, we don’t sell cologne or perfume or toilet water.

2) No, Cologne No. 10 For Men doesn’t take place in Cologne, Germany. It’s a Vietnam War satire, like Catch-22 or M.A.S.H, only it takes place in Vietnam, not Germany or Korea.

3) I don’t know if my satire is funny. Funny is in the belly of the beholder [that wasn’t funny, was it?]. The reviewer for the Vietnam Veterans of America, David Willson said, “Carmenghetti [the protagonist] figures out a way to end all killing in Vietnam, and it involves body counts. I won’t spoil things with any more details. There aren’t very many funny Vietnam War infantry books. This is one of them. Read it and be amazed.” Other people have called the book “dinky dau,” and “wacky.” You be the judge.

4) This soldier on the cover has his finger under his nose because he has discovered that if he puts one drop of this Cologne No. 10 For Men under his nose, it will mask the stink of war.

5) MPT (Maryland Public Television) has not approached us about making a movie of Cologne No. 10 For Men. They did invite me to share their booth to sell my Vietnam War book because I participated in the Writers Hooch on LZ Maryland at the Maryland State Fairgrounds in Timonium, Maryland in June, where Maryland Public Television Saluted Maryland Vietnam Veterans. In the Writers Hooch, I sang some songs  from my Skytroopers CD, told about some of my war experiences, and read from Cologne No. 10 For Men.

6) Cologne No. 10 For Men is worth more than other books because it contains a complete lexicon of Vietnam War slang, terminology, and foul language (which I refer to as “army talk”), all jumbled together to form a novel work of art. My mother read it aloud to my aged father and told us, “I’ve never said those words before.”

7) The Porta-Potties are over there, just like that World War I song says.